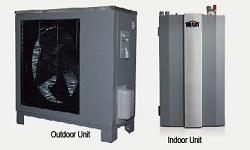 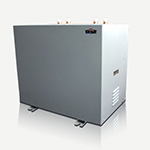 Heat pump works almost in the same way as home cooling appliances (ex. refrigerator and air conditioner). The only difference is in the direction of releasing heat energy. The main task of a heat pump is to automatically maintain the temperature in a specific range in a facility during the year, whether it is for cooling (during summer) or heating (during winter). In fact, there are no differences in the process of operation during cooling or heating. 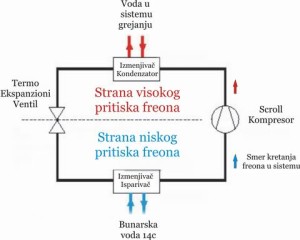 Picture shows basic illustration of heat pump components. In a hermetically sealed system, a compressor pressures freon from his gaseous state to his liquid state, where its pressure and temperature increase. Obtained heat energy is transferred from exchanger/condenser to the main heating system (water), and then in thermal expansion valve there is a decrease in freon pressure, which results in evaporating i.e. freon changes its state from liquid to gas. During the process of evaporation, cold energy is released and it is transferred from exchanger/evaporator to well water, after which the process of condensing the freon in a compressor starts over. The whole cycle is being repeated for the entire time of operating.